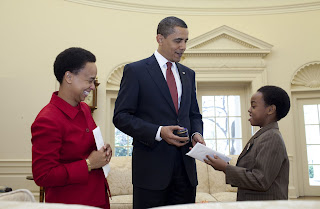 My sister sent this to me from a friend of a friend. Guess Sickle Cell is in the eye of our new president after all!

In our continuing efforts to spread awareness about Sickle Cell Disease…Gabriel and I got to meet with Pres. Obama on this past Tuesday! Can you say WHAT A GREAT DAY!

But we met with President Obama for 10-15 minutes in the Oval Office. He joked with Gabriel about the gifts Gabriel gave him. He was sooooo kind!

The Austin American Statesman interviewed us both this morning about the story…
There are more photos but this is all we have been given so far. Only the official White House photographer is allowed to take photos of the president in the White House…so I was not allowed to take any photos with my camera. But NOTHING could spoil that day!

It was a HUGE blessing!!!
God is incredibly GOOD!!! 🙂
Shelly and Gabriel George

Thanks to all those that have sent in links!

Sickle cell was also included in the inauguration:

Dealing With Sickle Cell When You Don’t Have Insurance

ABOUT US
Sickle Cell Warriors, Inc. is a non-profit charitable organization dedicated to education, empowerment, and awareness about sickle cell disease. Our mission is to inspire those affected by sickle cell. As of this minute, you are no longer alone. You have us—and we have you. Welcome to the warrior family.

Clicking this will take you to the external store site of one of our partners, the Red Chair Project. Enjoy shopping over 200 uniquely inspired sickle cell inspired apparel. For additional savings, use the SCW-affiliate code SCW7WSCD. Happy shopping!